Everyone is welcome at the Boonooroo Bowls Club!

Excerpts taken from 'A History of the Boonooroo Sandy Straits Bowls Club' by Arthur Pannell, 2004.

The communities of the Great Sandy Strait – Maaroom, Boonooroo, Tuan, Poona and Tinnanbar were, in the mid 1980s, poorly served by any sort of sporting venues.

These villages were peopled, in the most part, by fishing families and retirees who chose to live there to enjoy the quieter lifestyle.

The commercial aspects of the area were, and still are, centred around a diminishing number of professional fishermen and caravan parks in all the villages, except Tuan.

It was the proprietor of the Boonooroo Caravan Park, Bob Quinn, who first floated the idea of establishing a bowls club at Boonooroo.

While inquiries were being made of Government Departments and the Maryborough City Council, as early as March 6th 1985, the first recorded public meeting held to discuss the possibility of establishing a bowling club was held on 23rd March 1985.

Twenty-seven people attended that first meeting which was held in the Boonooroo Progress Association Hall. The meeting only lasted half an hour, but it must be recognised as one of the most significant meetings in the Club's history.

It was resolved that a formal public meeting be called to make the most important decision as to whether a bowling club was to be established at Boonooroo. The date for that meeting was set down for 11th June, 1985.

On the 22nd May, 1985, the Maryborough City Council advised Bob Quinn that the Council was in agreement with the establishment of a bowls club in the area and was taking steps to get the proposed site under Council control; at that time is was still Crown Land.

Records show that the land was cleared on the weekend of 23rd February, 1986. Plans were made to have the green constructed and ready for planting with 'Tiff Dwarf' grass by August or September, so as to take full advantage of the summer growing season.

In August 1986, the club bought a 6m x 6m shed, which became the Clubhouse, and still functions as our machinery shed today.

The club was officially opened on the 7th February, 1988 and later a commemorative plaque was erected to mark this occasion and we became a fully acknowledged part of the bowls community.

With all the trials and tribulations that were overcome by our early members, we now have a club of which we can be immensely proud and we owe a great debt to those who had the foresight and fortune to establish – the 'Boonooroo Sandy Straits Bowls Club Inc.' 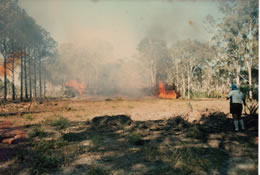 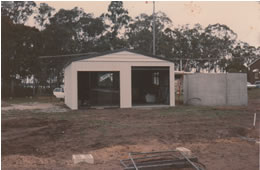 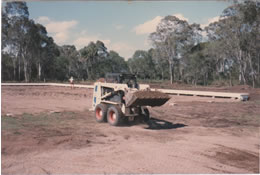 Working on the green 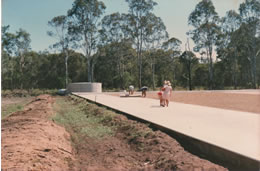 Still working on the green 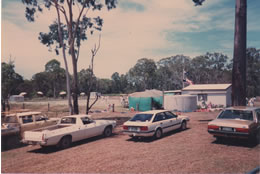 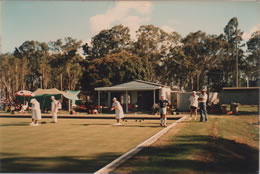